You rely on your car to get you to school, work, and everywhere in between. When it’s time to go you expect to turn the key (or push the button), put it in gear, and be on your merry way. Except for the day when your car decides it doesn’t want to start and to make matters worse, you’re probably running late or it’s pouring rain.

Don’t let your car not starting get you down, it happens to every driver at some point. Learn what to look for when your car won’t start so you know whether it’s something as simple as a battery or a major repair is due.

What To Do When Your Car Won’t Start

In order for your vehicle to start, it needs adequate voltage, cranking momentum, compression, and fuel. When one of these elements fails, your car will have difficulty starting. Starting the vehicle can be divided into two parts: the first part involves the electricity that is needed to awaken the engine; the second part requires fuel, spark, and compression. Once you’re able to determine which part of the process has failed, it will make determining which component is responsible easier to find for repair.

When your car won’t start, it’s important to determine whether the car is not turning over or failing to crank. When a car won’t start and you do not hear the starter engage, it’s considered a no-crank, no start. When you attempt to start your vehicle and hear nothing but a bunch of clicking, that is the sound of the starter attempting to crank the engine to life. That is referred to as a crank, no start. 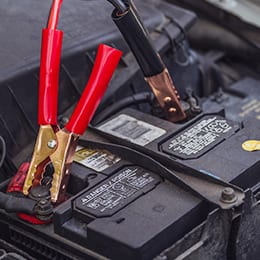 Your car needs a burst of electricity to rouse the engine. The starter, battery, and alternator are the first three components that are used to get the engine started. If one of these mechanisms has failed, your engine won’t have the initiative or power to start. Common issues related to the no crank and their symptoms include:

What To Do If Your Car Won’t Start and Cranks

Once the electricity has jumped the engine into action telling it to fire up to create spark and compression with the use of fuel, the engine will start. However, when spark, fuel, or compression are absent, your car won’t start, and you’ll hear a clicking sound indicating the starter is trying to do its part. Common issues related to the crank and no start and their symptoms include:

At Sun Auto Service we understand that starting issues are inconvenient and that you need your car to get from point A to point B and that’s why we guarantee fast, efficient, and quality service that you can trust. When your car won’t start, give us a call. We can provide towing when your vehicle is immobile and same day service to get you back on the road. There’s no need to worry when your car won’t start when you have Sun Auto Service on your side!

*Plus $3.00 waste disposal fee ($4.99 in San Antonio). Cannot be combined with any other offer. Exclusions apply. See store manager for details.